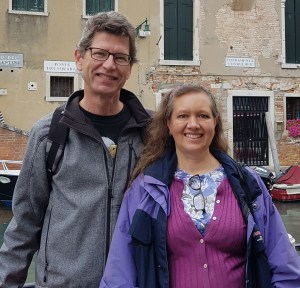 Karin grew up in a Christian home and even as a child had the dream of going to other lands and meeting foreign peoples always fascinated her. She has also always wanted to be a nurse. When she was 14 years old, she gave her life to Christ at a retreat. After High School, she went to the US to attend various schools from „Youth with a Mission“, and later served in the Miami base. During these years, she met Joe and in 1991 they got married in Germany. She completed her nurse’s training in Hamburg.

Joe grew up in Virginia, USA. He became a believer while in college. After graduating, he worked 5 years in Florida, where he met Karin and where God put missions on his heart. He went to Germany in 1990, where they got married and he worked 5 years in Hamburg while Karin studied nursing. From 1995 to 1998, he attended a seminary in Korntal, Germany. After finishing his Masters, he pastored a church in Kitzingen, Germany for the next 5 years. In these years Karin and Joe had 3 children: Samuel (1995), Sarah (1998), and Joshua (2000).

Joe and Karin received their call to missions independently of each other 20 years ago. From 2004 to the middle of 2010, they worked in the highlands of Peru with “Chacra de Dios” and ministered primarily in teaching and preaching the church and the training center.

Since June, 2010, they have joined Final Harvest Ministries, which is lead by Jeff and Christa Mills, who are also Globe missionaries. They are working with a quickly growing church in Cuidad Vieja with over 500 members that needs help with discipleship and teaching and leadership training. Joe and Karin are still getting to know the church and the ministry, but will be working in the home group program in order to lead the new Christians to spiritual maturity.
From July 2010 to December 2015, they served with Globe missionaries, Jeff and Christa Mills, in a rapidly growing church in Guatemala. Their focus was on preaching and teaching, including a new believers’ courses and a marriage seminars. They led home Bible studies and helped supervise the children’s ministry.

Since January, 2016, Karin and Joe are on staff at Youth with a Mission, Antigua. They will continue their teaching ministry, helping in the Discipleship Training Schools and in seminars for local believers and churches.

Their long-term vision is to build up leaders, encouraging and teaching them with the hopes that they will also teach others. They are inspired by 2 Tim 2:1-2: You then, my son, be strong in the grace that is in Christ Jesus. And the things you have heard me say in the presence of many witnesses entrust to reliable men who will also be qualified to teach others.

is available under this link