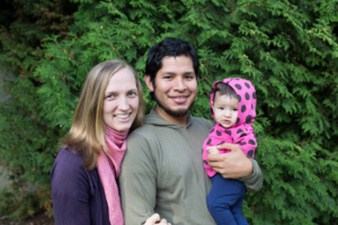 Alexander is from Costa Rica. Since his teenager years, he has been involved with Youth with a Mission (YWAM) in his region, where he experienced valuable personal discipleship. He also gained his first insights into missions and assumed more and more responsibility, also in his local church. In 2006, he attended a DTS (Discipleship Training School), in 2008 the SOW (School of Worship), and in 2010 the FCD (Foundations of Community Development).

Julia, from Germany, acquired Missions experiences between 2004 and 2008 during several periods as a volunteer and intern. She also attended a DTS. She has been in Costa Rica since 2010, where she served during the first years in different areas at YWAM in San José, among other things as a staff member in their DTS. In this time, Alex and Julia met.

They got married in the summer of 2012. Since then, they have been living and serving in a remote region among an indigenous people. Even though there are some small churches there, not many people get married, many families are broken, there is little support for children, young people often fo not see a perspective for their lives, there is little employment and, in addition, a strong negative influence in terms of drugs and alcohol.

Their wish is that people open themselves for God, finding in Him the purpose of their lives, hope and support; that the desire is awakened and encouraged in them to follow Jesus faithfully, and to live according to biblical principles.
For this reason, they invest themselves in discipleship by talking and praying with individuals, but also through small groups. In addition, they conduct projects in sustainable agriculture. Their concept of development of societies is an integral one: human development in all areas of live and in their relationship with God, which in turn is the foundation of a sustainable positive development of a society.

Furthermore, on demand, Alex and Julia supervise Missions trips in the region for groups of YWAM and churches. Alex is responsible for planning and implementing the NIKO camps for YWAM San José, an intensive camp with numerous challenges that have to be overcome as a team and individually.