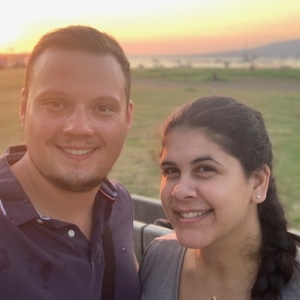 About Devid and Valentina

Devid and Valentina Walder are married and parents of two boys (Elon and Sion).
As mission partners of Globe Mission they are active in South Tyrol, Northern Italy (Devid’s home country).

Devid was born and raised in South Tyrol.
From 2013 to 2015, he attended the Glaubenszentrum Bible School in Bad Gandersheim, Germany.
In his second year of school, God gave him a vision of a house of prayer in Merano. Although at that time he had no exact ideas about what a prayer ministry or 24/7 worship and praise was Worship is, he cherished this dream from that point on.

In the spring of 2015 he went on a 10-day mission trip with the Bible School to Caserta, southern Italy, where he got to know both the HOP (House of Prayer) Italia prayer house and Valentina got to know. In the fall of the same year he returned to to Caserta to serve in the House of Prayer as a missionary for 2 years.

Valentina was born in Ciudad Bolivar, Venezuela. At the age of 6 she returned with her family to her father’s homeland in Italy.
After her father converted a short time before, he lived as a missionary in Italy. Unfortunately, her parents’ marriage did not last, so her mother returned to and her father raised the four children alone (Valentina is the only daughter).

Valentina learned from an early age what it means to live in faith. Although her father gave up his work as a missionary to return to his original work, she learned through the hospitality of her father, who always had an open house, she met many missionaries from all over the world.
So also Devid, when he came with the missionary team from Germany came to stay at her house during that time.

After they got married in 2016, they came to South Tyrol the following year to work together with other Christians from different denominations to
to build up the house of prayer in Merano.

Devid and Valentina’s ministry is to help Christians in South Tyrol to to find and grow in their vocation that God has placed on their lives.They want to invest themselves in people with prayer, experience and encouragement.
In this way, the Gospel of Jesus Christ will spread throughout the country.

The vision of HOP Meran-o is to create a place of continuous worship and of prayer, a place filled with the presence of God.
Each person should find here rest, peace, joy, healing and restoration.

Valentina serves as a leader in children’s ministry. Her heart is to lead children into an active lifestyle of prayer and worship, strengthening their relationship with God.