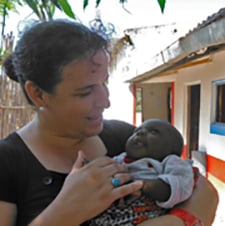 Myriam Wahr grew up in a Christian home.

She has 4 brothers and sisters. Little by littel she grew up in her faith. She was baptised at the age of 16. Several years she worked in the youth work of the evangelical methodist church.

Since 2001 she has been attending the christians missions church “Arche”, which is also her sending church. After her professional training as a children’s nurse from 1994 – 1997, she completed a 6-months discipleship course with Youth with a Mission in Hainichen, Saxony. She participated in different short-term missions trips, like for example to Guayana, Mali and Mozambique. The desire to go to the missions field has been on her heart for many years.

From 2004 to 2008, Myriam lived at a farm in the north of Mozambique, 12 km from Monapo. She started a ministry with natural medicine and was responsible for a feeding programme for orphaned and undernourished babies. She then moved to Memba and set up health posts there as well. The health posts are built by locals under Miyriam’s supervision and the health workers are volunteers. Patients are treated with natural medicine which is produced by the health workers.

She moved to the Mossurildistrict in 2013 where she started the next stage of aid for the needy people. In that year, she and her team conducted more than 42,000 treatments (including wound treatments), in 2014 approximately 47,000 treatments. Until the beginning of 2015, she has set up more than 50 health posts in four districts. She also conducts village health education, radio programs, a prison ministry and a program for orphans.

Her main goal is multiplication and sustainability. Her focus is showing people God’s love and compassion and to accompany them on their way to help themselves – and that they would know the Lord Jesus aus their Lord and friend.

She focuses on multiplication, demonstrates God’s love and mercy and guides them on their way to help themselves and helps them find Jesus as their Lord and friend.