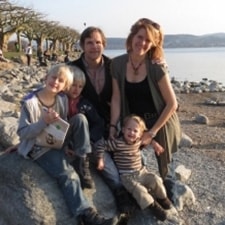 born in Berlin, tried to find a meaningful life in different religions, before he found Jesus as his saviour in 1988.

comes from a Christian background and decided to follow Jesus in 1988. In the same year she had her first vision about Africa. God always reminded her of this calling in her life, even though she experienced a massive spiritual crisis in between. She went to Berlin and there she experienced a new, even more intensive dedication to God. During this time she met Kay.

1997 Kay and Anne-Kathrin married and moved, on godly instructions, to Hameln, where they were mainly engaged in an evangelistic kids- and youth ministry, knowing that God would call them to Africa in his time.

In 2000 the time came to go to Kenya, to be prepared for a longer time of ministry in the Sudan. In January 2001 finally the time came!

In Kenya they first learned the national language Kishuaheli and helped in different street kids programs. They finished a Bible seminar near Nairobi for a bachelor’s degree which will help with the ministry in the south of the Sudan.

One of their main tasks in the past was to plant a church amongst Sudanese refugees in Uthiru, near Nairobi. Besides the church programme they are running a sewing class for single mothers and are offering private lessons for children unable to pay school fees. In 2009, a primary school was started which offers classes from kindegarden to 8th grade. Poor Kenyan and Sudanese children acquire an recognised Kenyan qualification

Through their teaching and preaching ministry as well as seminars, the Schuberts help educate and train Africans to become missionaries and then send them to countries like Sudan.

Trough doing this and sending and supporting Kenyan missionaries they were able to plant a church deep in South Sudan (Wau). Through mercy ministries like feeding programmes for the poor, teaching street children about hygienic and a lot of other offers of help a strong work could be established. One building is still missing but plans are in preparation. During a famine in 2006, 700 families could be fed through providing transportations of meals. Besides the practical help, the church provided a lot of spiritual help. A lot of healings could be testified and also other miracles of God.

In 2010, Kay was tehre and preached in various localities, and many got saved – even a small-scale war was prevent as a result. Currently, Sudanese people are being prepared to be sent to Sudan in order to found churches there.

Since 2006, the Schuberts have also been engaged in a small group ministry with Somalese refugees. Kay was in Somalia during the time of the Tsunami and saw the country’s need on-site. Another area is practical small-scale “help for self-help” for Somalese women. Schuberts provided sewing machines and materials for enabling self-employment. Because of their faith, Somalese Christians are persecuted severely, even in Kenya.

Currently, the Schubert family is in Germany for a sabbatical until the summer of 2016. Their projects such as school, church etc. are continuing, and they supervise them from Germany.