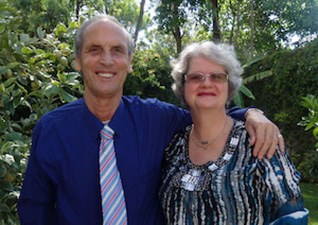 Jeff and Christa have lived in Antigua, Guatemala since 1993. For more than five years they worked there with Adopt-A-Child, until early 1999 when they started their own ministry, Final Harvest Ministries.

Jeff is an evangelist, and his heart is for the lost. In order to reach out to them in the most effective way, he invests himself mainly into new, up-coming churches. Among his main activities are the showing of evangelistic films followed by short preaching and the invitation to give o¬ne´s life to Christ, and participation in evangelistic campaigns and seminars. Moreover, he preaches when invited to churches lifting up the saints, and he strives for the unity and the working together of the leaders of different local churches whenever there is an opportunity to do so. God confirms Jeff´s ministry with miracles, healings and prophetic words.

Christa has the gift to love and encourage people and to impart in small groups the truths of the Word of God with wisdom and understanding. With her talent for languages she supports the ministry of Jeff and Final Harvest Ministries by way of translating the monthly newsletters and Jeff when he is preaching. She also had the privilege to translate two booklets for “Casa de Dios”, a big and continuously growing church in the capital.

Jeff and Christa. In 2012 God opened new doors for Jeff and Christa to work alongside a young pastor in Northern India. Jeff has held some large evangelistic campaigns which have led to thousands of Hindus and Moslems receiving Christ as their Savior with many, many receiving deliverance and/or healings, several of serious illnesses like diabetes, cancer, liver and kidney problems, deafness and dumbness. At each of these campaigns there has been “follow-up” which has led to over 138 house churches being started in different towns and villages in the past two years.

Jeff and Christa know that also in the future, the work on the mission field will bring new things, and they are excitedly looking forward to what the Lord has in store for them. Their vision is to build the Kingdom of God and to lead people into the truth and freedom where and however possible.