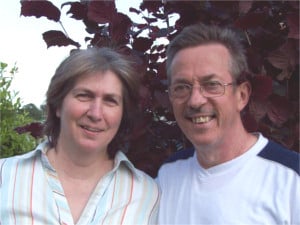 Armin and Patricia (Patty) Weissenfels have been serving in missionary work since 1998.

They both received their calling to do this at quite different times in their lives. Patty grew up in a home where the Bible and church played a central role. During a holiday mission trip to Zaire in Africa, she felt that God wanted to use her in his harvest field. She was in her early twenties and still single.

Armin, who had grown up in a traditionally Catholic home, came into a living relationship with Jesus Christ much later. Although in him the desire to share the wonderful experience of God in his life with others (even on a global level) grew very quickly, it was still a long process before he actually took the step of becoming active as a missionary.

Patty and Armin got to know and love one another in a church context. In 1986 they got married. Their marriage has produced four children: Hannah, Tobias, Carsten and Friederike.

In 1994, Armin handed in his notice at the German Rail and the family moved to Augsburg to study Theology at the Harvest Bible School. During this time it became increasingly clear to Armin that unreached people groups should take top priority when it comes to carrying out the Great Commission. Moreover, it became evident that the country in which they were to serve was India. In 1998 they followed the calling to join the central office of Globe Mission because they believed they could be fruitful to this end there, even if Armin was initially to be responsible for all kinds of administrative tasks. As the organization grew, his responsibilities covered fewer and fewer areas until only the area of media remained. After several short visits to India, both alone and with groups, they founded the branch ministry IN.touch in the year 2000.

During the outreaches, they served local leaders and teams or served the country through prayer. They started establishing kindergartens in the Himalayas. In association with these kindergartens more than 300 house churches in approximately 20 unreached people groups have been set up. They also ministered within leper colonies in South India by means of medical aid and thereby supported church planting efforts there. After this, the indigenous people groups Irula and Panniya came into their focus: here, they also used social means (kindergardens) to provide good preconditions for sharing the Gospel. The church planting projects were successful and were handed over to local hands after a few year. Christian leaders of these people groups were trained in community development, story telling and church planting movements.

Since 2010, IN.touch has been cooperating with a christian NGO in Hyderabad. We operate some small children’s homes, a back-to-school program and a program for girls from prostitutes’ families. Since almost all of these children come from unreached people groups and the NGO has a church planting team, we know we are operating within our calling from God.

Since the autumn of 2007, Armin has been working for this branch ministry on a full-time basis and is supported in this by Patty as far as possible. Armin and Patty are leading the ministry from Germany.